BIG NEWS! In response to our region’s major feral/stray cat overpopulation and lack of resources to address the issue, we decided it was time to take action ourselves. We’re starting a fund to help cover the cost of spay or neuter and rabies vaccinating local, un-owned, “community cats.” Our Community Cat Coalition’s will use the “Trap-Neuter-Return” strategy, which has been proven to be a humane and effective means of controlling overpopulation. 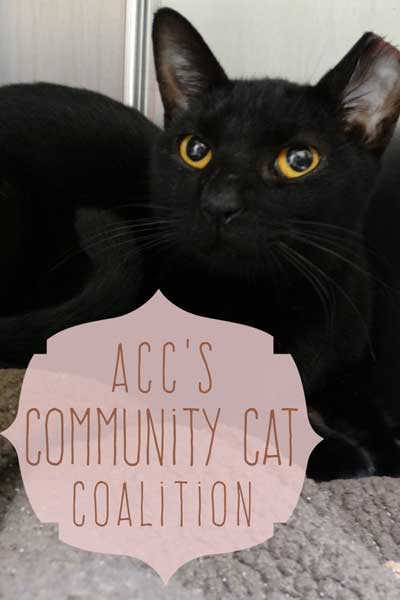 Our very first patient today was this beautiful girl who was live-trapped overnight by our Registered Pet Nurse, Lacie. She actually appears to be tame, so let us know asap if you’re interested in adopting her before she’s released back to her neighborhood! And if you’ll look closely at her left ear, you’ll notice a “notch”–we used our surgical laser to leave an obvious, visible indicator that she has been spayed, so that she is not repeatedly trapped and sedated in the future. She also received a rabies vaccination and a broad-spectrum parasite preventative dose.

If you’ve also noticed this problem in our area, love cats, and want to support our cause, we are now accepting donations to the Community Cat Coalition fund to help cover anesthetic medications, pain medications, surgical supplies, live traps, and rabies vaccinations.

For more information on Trap-Neuter-Release, check out the major national proponent, Alley Cat Allies’s info page, or read on below:

Trap-Neuter-Return (TNR), the humane approach to addressing community cat populations, works. It saves cats’ lives and is effective. TNR improves the lives of cats, addresses community concerns, reduces complaints about cats, and stops the breeding cycle. TNR improves the co-existence between outdoor cats and humans in our shared environment. This is why so many cities are adopting it.

Scientific studies and communities with TNR programs are proof that TNR reduces and stabilizes populations of community cats. Alley Cat Allies was formed in 1990 to bring TNR—which was already successful in the UK—to the U.S. We launched a national movement with our educational materials, regional workshops, mobilization of advocates, and re-writing of laws. As a result of this hard work, TNR has become mainstream.

For cats and for communities: TNR works.

In a Trap-Neuter-Return program, community cats are humanely trapped (with box traps), brought to a veterinarian to be spayed or neutered, vaccinated, eartipped (the universal sign that a community cat has been neutered and vaccinated), and then returned to their outdoor home.

For more than a century, the American shelter and animal control system has been relying on catching and killing outdoor cats to control their population. This approach continues to fail, and the number of outdoor cats increases despite the fact that millions of vibrant, healthy outdoor cats are killed each year. Taxpayer money that funds shelters and animal control agencies is wasted on an endless cycle of trapping and killing. Increasingly, the public believes that the money spent on killing could and should be re-allocated to programs that help animals.

With catch and kill policies, vaccinated and neutered cats are removed from an area. But that only creates a vacuum in the environment, where new cats move in to take advantage of available resources. The new cats breed and the cat population grows. Catch and kill policies aren’t just cruel and ineffective, they go against what the public really wants: humane approaches to cats.

TNR balances the needs and concerns of the human communities in which many feral cats live. People don’t want cats rounded up and killed. They want to see cat populations stabilized and appreciate when the mating behaviors of cats are brought into check through spaying and neutering. With TNR, adult cats—spayed or neutered, vaccinated, and eartipped—are returned to the colony to live out their lives in their outdoor home.

Alley Cat Allies started in 1990 with a colony of 54 cats living in an alley in northwest Washington, D.C. Caregivers and new volunteers implemented TNR, and the benefits were clear. Over time, the colony declined naturally and humanely. The cats were welcomed in the neighborhood and cared for by many of the residents.