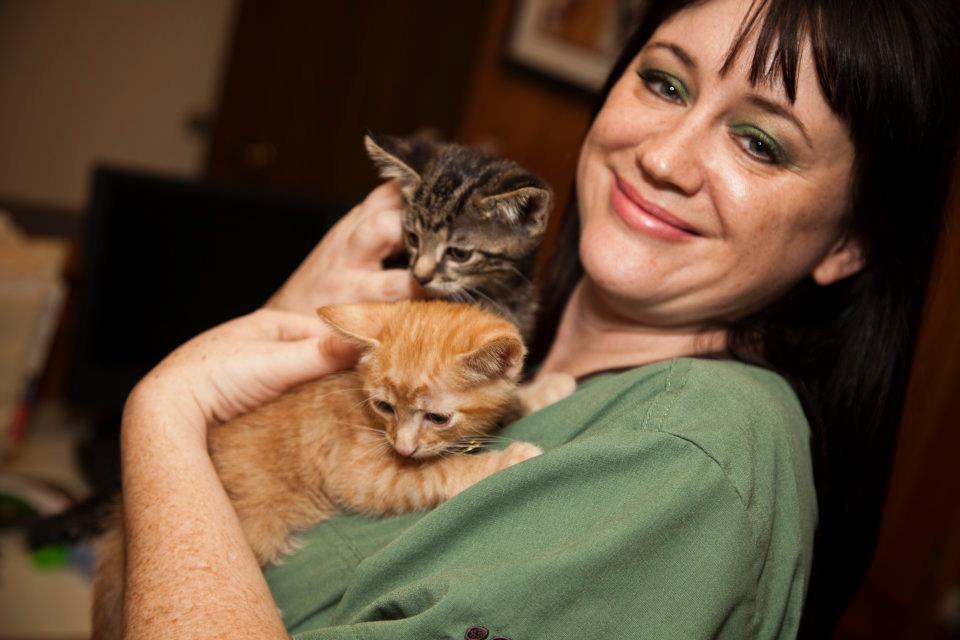 All kittens and young cats need to play. Play is normal behavior that provides young animals with opportunities to develop their physical coordination and problem-solving skills. It also gives them a chance to hone thei…r social skills with members of their own species. It’s very common for kittens and young cats to engage in rough, active play because all feline play consists of mock aggression. Cats stalk, chase, pounce, swat, kick, scratch and bite each other—all in good fun. However, people often misinterpret this kind of behavior as aggression when it’s directed toward them.

Cats display two different types of play behavior: solitary play and social play. They direct solitary play toward objects, like toys, skeins of yarn, paper bags, boxes and rolled-up paper. Social play is directed toward fellow cats, people or other animals. Unfortunately, problems can sometimes arise when feline play is directed toward people. Despite the playful intentions of a cat, he can cause injury to his human playmates. Cat scratches and bites are painful and can easily become infected.

Other Behavior Problems to Rule Out
Aggression
Cats occasionally display aggression toward people. True aggression is most likely to occur in cats who are easily frightened or when they react to the sight, sound or scent of another cat outdoors. If you live with a cat who’s under one year of age and you’re his only playmate, it’s likely that he’s playing roughly with you rather than actually behaving aggressively. However, it’s sometimes difficult to determine the difference between feline play and real aggression. It might help to observe your cat’s body language. Two behaviors that cats frequently display when playing are the “play face,” where a cat holds his mouth half open, and the sideways pounce or hop, which a cat often does with his back arched. Cats also tend to play quietly. During aggressive encounters, however, they often growl, hiss and spit.

How to Reduce Your Cat’s Rough Play Behavior
•Provide a variety of toys for your cat so you can determine his preferences. In general, cats seem to enjoy batting at small toys, like balls and fake mice. They also like to stalk, chase and pounce on things that move like prey, such as toys with feathers attached to flexible rods that you can dangle and move about. Try getting your cat a Kitty Teaser™ or some other kind of toy that dangles. Please see our article, Cat Toys, to learn more about playing with your cat and choosing the best toys for him.
•Frequently give your cat new objects to investigate, such as paper bags or cardboard boxes.
•Twice a day, spend at least ten minutes playing with your cat. During playtime, don’t encourage him to bat at your hands or feet. Instead, direct the play away from you by using a long dangly toy or throwing your cat’s favorite toys. Schedule play sessions to coincide with times when your cat seems most active and playful.
•If your cat likes to grab your feet as you go up and down the stairs or hide under things and ambush your ankles or legs as you walk by, carry toys with you and toss them ahead of you to redirect his attention. Try to get him to focus on chasing the toys instead of attacking you.
•Consider adopting another cat as a playmate. If you do, choose a young, playful cat like your current cat.
•Build an outdoor enclosure for your cat, complete with branches, boxes, shelves and perches for him to navigate. If you can provide a more complex environment for your cat, full of opportunities to hunt insects and chase leaves, your cat will be less motivated to play with you.
•Consistently give your cat “time-outs” when he plays too roughly. The instant he starts to bite or scratch you, end the game by leaving the room. Don’t attempt to pick up your cat and put him in another room for the time-out as this could provoke more bites.

What NOT to Do
•Do not encourage your cat to play with your hands, feet or any other body part. While it may be fun when you have a tiny kitten, it becomes painful and dangerous as your kitten grows up.
•Do not use toys that teach your cat to play with your hands, such as gloves with balls hanging from the fingers. If you do, your cat will be encouraged to direct his play at your hands and won’t understand that it’s only okay to attack your hands when you’re wearing the toy gloves.
•Do not physically punish your cat for rough play. If you hit or slap your cat, he may perceive your actions as play and become even rougher. Alternatively, he might become fearful of your hands and respond by avoiding you or changing from play to real aggression.
•Never run from your cat or try to block his movements with your feet. These actions can cause your cat to intensify his play or become aggressive.

If your cat insists on directing his play at you, despite your best efforts to encourage him to play with toys, you can interrupt his rough play behavior by squirting him with water from a spray bottle. A short blast of compressed air (no sound) from a can might also be an effective deterrent. You’ll need to carry your water bottle or air canister with you at all times when your cat is likely to ambush you so that you can deliver the spray the instant he starts to run at you. If your cat pounces on you and you don’t have your water bottle or air canister handy, try clapping your hands loudly to startle him. As soon as he stops, throw a toy away from you to direct his play behavior toward the toy. Small wads of paper kept in your pocket or in likely ambush places around the house often work well as substitute toys.

It may take a bit of time and effort, but if you’re consistent and patient, you can teach your cat to direct his playful energy toward appropriate toys instead of you. If you need help, don’t hesitate to contact a Certified Applied Animal Behaviorist (CAAB) or a board-certified veterinary behaviorist (Dip ACVB) for assistance. Please see our article, Finding Professional Help, to locate one of these qualified experts in your area.
http://www.aspca.org/pet-care/virtual-pet-behaviorist/cat-behavior/cats-who-play-roughSee More