Clarence has been eating a little slower lately… 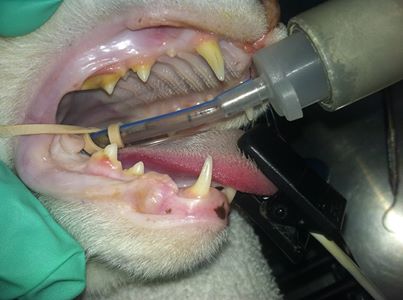 Clarence is a 7 year old Abyssinian x Domestic Shorthair mix that has been eating a little slower lately. He also has a history of multiple tooth extractions at age 2 due to Feline Resorptive Lesions. Brief exam of Clarence’s mouth.while he was awake found mild-moderate dental tartar and mild gingivitis in places. Examination under general anesthesia found 3 new resorptive lesions that were so painful that he flinched his head every time the affected areas were probed. Gum flaps and dental burs were used to extract the 3 affected teeth. We also used lidocaine blocks to numb the area we were working on, so that we could keep Clarence on a lighter (and safer) plane of general anesthesia. We also scaled polished his remaining teeth. Clarence has been feeling good on his post-op pain medications, and he’s currently roaming around the hospital looking for treats!

Feline Resorptive Lesions are very common in cats. They are very painful areas of eaten away enamel. Though they are incredibly painful, many cats show no symptoms or only have mild changes (not wanting to play as much, less interest in food). At this time, we’re still unsure what causes these lesions. According to the American Veterinary Dental Society, 60% of cats over age 6 have at least one, and most cats who have one have more elsewhere. Clarence’s affected teeth are the back tooth on the bottom, and the top two back teeth on the top. You can see a bit of redness in the gums covering the lesion on the bottom tooth, but the top teeth were more obvious from the inside aspect. For more information and phootos on resorptive lesions, check out the AVDS page: http://www.avds-online.org/info/felinelesions.html .