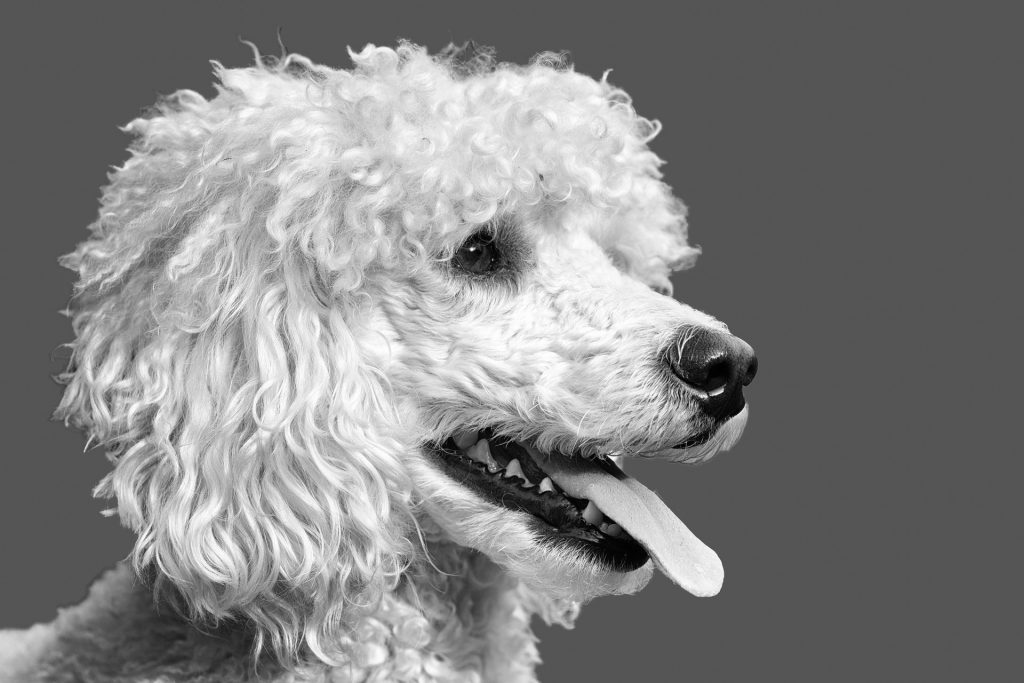 Poodles are the most likely breed to have Cushing’s Disease.

-Excessive urination and thirst, incontinence
-Excessive panting
-Ravenous appetite, severely excessive begging
-Hair loss on the main body but not head/legs or lack of hair regrowth after shaving
-Thickening/hardening of the skin on the back
-Recurrent infections (often urinary tract infections)
-Thinning of the skin with more obvious blood vessels on the belly
-Muscle weakness causing pot-bellied appearance, increased boniness of face, or reluctance to keep up on walks or jump onto furniture.

In rare cases, a pituitary tumor can become large enough to compress the brain, leading to neurologic symptoms like seizures.

Cushing’s symptoms can also develop from long-term use of cortisol-type medications–steroid medications like prednisone, Depomedrol, and even ear medications containing steroids like hydrocortisone.

Cushing’s disease can be a costly disease to diagnose and treat. There is no perfect screening test, so the initial work-up can become fairly involved for some patients. After confirmation, lifelong management is indicated—most often requiring daily medication with specific follow-up evaluations and testing. We generally don’t pursue confirmatory testing unless the patient has obvious symptoms and the family has an intention to treat if Cushing’s disease is diagnosed.

If a patient is sick from any other illness, then the more urgent medical issues should be addressed first. Because Cushing’s disease is rarely a life-threatening issue, it’s better to delay testing until our patient is otherwise healthy. Additionally, since testing involves checking cortisol levels, which are affected by illness or stress, Cushing’s tests during times of illness are impossible to interpret.  Patients should be feeling good (except for Cushing’s disease symptoms) for at least 2-4 weeks prior to pursuing confirmatory tests.

Urine Cortisol:Creatinine Ratio (UCCR) – This test checks the cortisol level in urine. It is primarily used to rule out Cushing’s disease, such evaluating a patient for excessive thirst/urination that doesn’t otherwise fit a diagnosis of Cushing’s disease. Although a negative UCCR proves that Cushing’s is very unlikely, a positive test does not confirm Cushing’s.

Low-Dose Dexamethasone Suppression Test (LDDST) – This is the most popular and most accurate confirmation test because it catches 90% of cases. The LDDST helps determine if the adrenal glands are normally suppressed by a small dose of steroid (dexamethasone). It can often differentiate between the pituitary versus adrenal gland forms. This test requires a full day (8 hours) at the clinic to complete.

ACTH-Stimulation Test – Although this test doesn’t take as long to perform, the cost is higher and it’s not as sensitive at confirming Cushing’s disease as the LDDST. It’s less affected by other illnesses, so we mostly use this test for diagnosing patients with other medical issues.  The ACTH-Stimulation is also used for monitoring response to treatment.

Abdominal Ultrasound – Ultrasound exam can help determine if either or both adrenal glands are enlarged, if there is an adrenal gland tumor, and if there are complications developing elsewhere.

Our major goals for managing Cushing’s patients are controlling problematic symptoms, reducing complications like recurrent infections or excessive blood clots, and minimizing risk of complications from treatment itself. The two primary current treatment options are:

Vetoryl (trilostane) is a long-term, twice daily medication that is FDA-approved for treatment of both forms of Cushing’s disease.  It works by blocking an adrenal gland enzyme involved with cortisol production.  Mild lethargy and reduced appetite are common initial side effects as the patient gets used to a lower level of cortisol. Over-suppression reactions with permanent damage to the adrenal glands have been reported but are uncommon and usually reversible; however, diligent monitoring when starting the medication is needed in case this occurs.  ACTH-stimulation tests are generally needed at 14 days, 30 days, 90 days, then every 3-6 months. More frequent testing may be required if dose adjustments are needed.