My dog was diagnosed with “Medial Patella Luxation”–what does that mean??

The medial luxating patella, commonly called a trick knee, is an extremely common problem in toy breed dogs. An owner typically notices a little skip in the dog’s step. The dog may even run on three legs, holding one hind leg up, and then miraculously be back on four legs as if nothing has happened.

In fact, something has happened: the kneecap (patella) has slipped out of the smooth groove in which it normally rides up and down. It has slipped medially, which is to say towards the opposite leg, as opposed to laterally, which would be away from the dog entirely. With the patella dislocated (or luxated) medially, the knee cannot extend properly and stays bent. Hopefully, the patient will be able to slip the kneecap back where it belongs and be back to normal in only a few steps. For some dogs, getting a kneecap back where it belongs and normal extension of the rear leg is a mere dream only attainable with surgical correction.

Approximately 50% of affected dogs have both knees involved while the other 50% has only one knee involved.

Grade I: The kneecap can be moved out of place manually but will fall back into its natural position once the manipulator lets go.

Grade 2: Same thing except that the kneecap does not move back to its normal position when the manipulator lets go. These dogs are likely to progress to arthritis development and should be considered for surgery to prevent conformational damage. There is some controversy over whether grade 2 dogs should have surgery.

Grade 3: The patella is out of place all the time but can be manipulated back into its normal position manually (though it will not stay there).

Grade 4: The patella is not only out of place all the time but cannot even be manipulated back into place by hand. Such a dog has extreme difficulty extending his knees and walks with his knees bent virtually all the time.

It is not a good thing to have one’s knee cap out of place; the entire weight-bearing stress of the rear leg is altered which, in time, leads to changes in the hips, long bones, and ultimately arthritis. How severe the changes are depends on how severe the luxation is (i.e., the grade as described above) and how long that degree of luxation has been going on. In time, the legs will actually turn outward with its muscles turning inward, making the dog bow-legged. The luxation is not considered a painful condition but after enough time and conformational change, arthritis sets in, which is indeed painful.

Dogs with Grade I luxations do not require surgical repair.

Grade 2 dogs may benefit from surgery and most often the owner is called upon to judge how big a problem the lameness is.

Dogs with Grade 3 or 4 disease definitely should have surgery.

What Surgical Procedures are Available?

Lateral Imbrication (also called Lateral Reinforcement)
This procedure alone may be adequate for a mild case but is often used as an adjunctive procedure to supplement one of the other surgeries. When the patella slips out of its groove, the joint capsule surrounding it is stretched to allow this motion. Imbrication simply involves taking a tuck in the joint capsule. The tightened joint capsule does not allow for the slipping of the kneecap and the kneecap is confined to its proper groove.

Trochlear Modification
The patella rides in a groove at the bottom of the femur (thigh bone). In toy breed dogs this groove is shallow, which allows the patella to slip. If the groove is deepened, the patella stays where it belongs. The normal groove in the femur is lined by slippery lubricated cartilage, called hyaline cartilage. This cartilage is peeled or cut away, the bone underneath is sliced out to form a deeper groove, and the cartilage is replaced. Techniques that do not preserve the original cartilage are no longer recommended.

Tibial Crest Transposition
If the knock-kneed conformation has already started to set in, the tibias (or leg bones) will have rotated. In particular, the crest on the tibia where the thigh muscle (the quadriceps femoris) attaches may have migrated inward. If this is the case, the crest will have to be removed and pinned back where it belongs to straighten out the leg. Severe rotation of the tibias may involve actually cutting through the entire bone and de-rotating it back into place.

Should both Knees be Repaired at once or should they be Staged?

Some surgeons feel that doing one leg at a time, 8 weeks or more apart, is beneficial as the patient will have one good rear leg upon which to walk. If the patient is very young (under age one year) it may be a good idea to do both legs at the same time so as to prevent conformational problems in the leg not operated first.

If imbrication was the only procedure, expect 3 to 4 weeks of confinement. If any of the other procedures above were utilized, expect more like 6 to 8 weeks of confinement depending on the surgeon’s preference. During this time easy walking (no running or jumping) is helpful. The dog should be using the leg by two weeks post-operatively though some dogs must be retrained to use the leg after surgery. Physical therapy is in order if the dog is not using the leg after one month.

For this and many other educational articles, check out veterinarypartner.com! 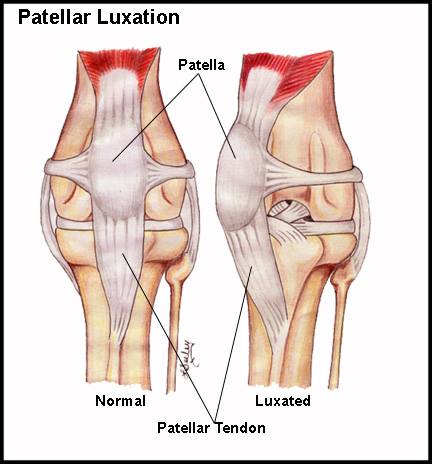