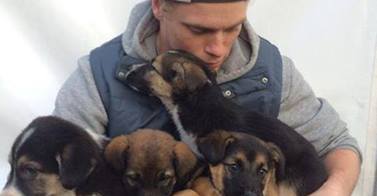 KRASNAYA POLYANA, Russia — American freeskier Gus Kenworthy is planning to leave the Sochi Games with a lot more than he arrived here with. Not only will his carry-on luggage i…nclude a newly won Olympic silver medal, but Kenworthy is hoping to take a family of stray puppies back home to Colorado.“They’re the cutest things ever,” he says. Kenworthy, 22, spotted the family of dogs — a mother and four puppies — near a security tent in the mountains outside of Sochi. Stray dogs have been an unavoidable site at these Olympics and have attracted plenty of attention from athletes and journalists alike. Kenworthy has stopped by to feed and play with the family of dogs and says he’s in the process of arranging vaccinations so he can bring them back to the United States.“I’ve been a dog lover my whole life and to find the cutest family of strays ever here at the Olympics was just a fairy-tale way to have it go down,” he said, shortly after winning silver Thursday in men’s slopestyle, a new freestyle skiing event. He tweeted his intentions Wednesday and was inundated with responses. He said he hopes to keep one puppy for himself and find good homes for the others. Kenworthy said he has been a dog lover his entire life. His childhood pet — a mixed breed named Mac who was adopted from the Animal Humane Society when Kenworthy was just 11 — died last year. Asked what he might name his Russian pups, Kenworthy exercised caution.“Dude, I don’t have them yet,” he said. “I can’t name them until I’ve got them.”