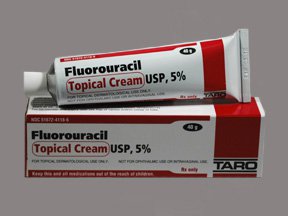 5-fluorouracil, or 5-FU, is a common prescription topical ointment used for many human skin conditions. However, many people are unaware how severely toxic it is to pets.

In dogs, seizures can start within 30 minutes of ingesting some of the ointment, and they can progress to death within 6 hours. Vomiting, trembling, and staggering are also commonly seen early after exposure.

Pets are most commonly exposed by chewing and puncturing a tube of 5-FU ointment, but some intoxications have also occurred by licking the medication from the owner’s skin or due to inappropriate use of this ointment on pets. Just a few grams of ointment is enough to be fatal for small dogs or cats.

Unfortunately, there is no successful antidote for this toxin in pets. If the pet makes it into the clinic before symptoms develop, the veterinarian may have enough time to attempt decontamination by inducing vomiting and giving activated charcoal to bind any remaining medication in the gut to reduce absorption. Severe digestive upset may still occur.

The seizures that quickly develop after intoxication with 5-FU usually don’t respond to normal anti-seizure treatments. General anesthesia and aggressive intensive care is often required to stop seizure activity. Unfortunately, many patients succumb to this intoxication or are euthanized due to uncontrollable seizures and severe intestinal damage.

Despite being such a severe threat to pets and such a commonly prescribed medication for humans, it’s still uncommon for prescribing doctors, pharmacists, or pharmaceutical companies to warn about the often-fatal danger it poses to pets. If you or someone in your family uses this medication, please be aware of the risk!

We provide a comprehensive, personalized approach to veterinary medicine with high standards of care and excellent customer service.

Review us on Google

If you want to support our business, please share your good experiences by reviewing us on Google.

Review us on Google