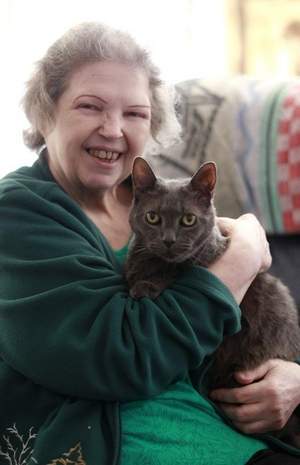 Trigger, a 13-year-old mixed-breed cat with a lot of Russian Blue in her, likes to spend the winter days in front of the living room window, moving slowly across the room as the sun m…akes its way across the sky.

But on the morning of Nov. 20, Trigger went for help as her 75-year-old owner, Erna Pratt, was suffering a stroke in her kitchen that left her unable to call for help.

Pratt, who lives with her adult daughter, Mary, and her 14-year-old grandson was in the kitchen making herself toast when she dropped the butter knife. She bent over to pick it up but couldn’t stand back up. Pratt pulled herself back up using the sink for support. She was having a massive stroke.

“I tried to take a step and discovered my feet wouldn’t work,” Pratt said. “I couldn’t move my legs. I tried calling Mary. She was in her room asleep. I couldn’t make my voice loud enough.”

Trigger was nearby meowing.

Trigger went down the hall, meowing loudly all the way. Pratt’s daughter called 911, and she was taken to Mercy Hospital Springfield. Pratt arrived soon enough to be treated with a drug that can dissolve blood clots that cause the vast majority of strokes. If done soon enough, this treatment can keep brain tissue from dying.

Mary Pratt said she could see the impact of the drug, tPA. The stroke had crippled the left side of her mother’s body.

“I saw her face come back,” Mary Pratt said.

Pratt stayed at Mercy for about two weeks, coming home on Dec. 5. One of the first things she did was thank Trigger the cat.